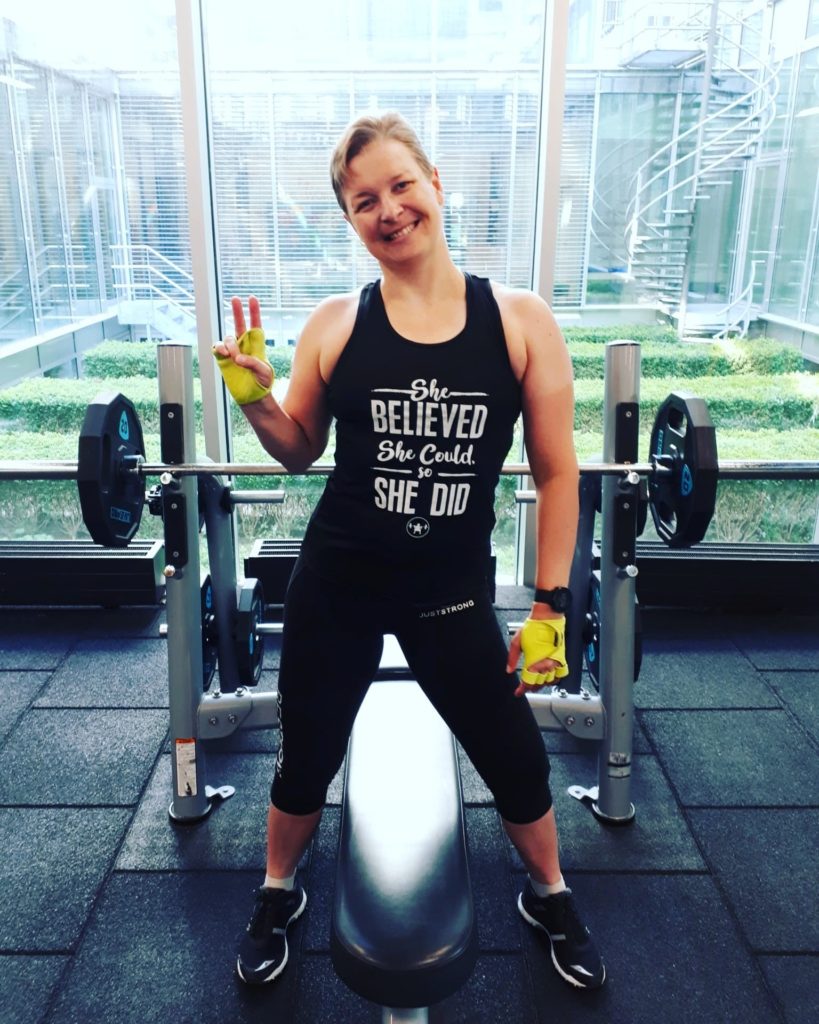 In June of 2019, Leanne Levitt was diagnosed with a giant cell tumor in her femur. Now, in August 2020, she is training for a half ironman triathlon, which she hopes to be ready for by next year.

Understanding how Leanne got to this point requires knowing how her career and active lifestyle began. Leanne was born and raised in South Africa and has been an international athlete since she was 12 years old. She started out with cycling, but after a devastating fracture of her humerus at the age of 17, the doctor encouraged her to incorporate swimming into her rehabilitation process, causing her to consider becoming a triathlete. When she was 19, she officially became a triathlete and has since had a career as one for over twenty years.

Leanne has traveled the world as part of her athletic career. At the age of 23, she competed at the World Triathlon Championships in Mexico. After returning, she started training to do an ironman triathlon, which consists of a 2.4-mile swim, a 112-mile bicycle ride, and a 26.2-mile run. Building up to an ironman consisted of years of half ironmans, long distance swims, and countless hours training. Throughout these years, she had numerous top five swims, a feat she is proud of considering her past arm fracture. At the age of 30, Leanne successfully completed her first ironman.

Over the next few years, Leanne continued to complete half ironmans and kept training. However, during her last half ironman in 2017, she felt pain in her leg and didn’t know why. A few months later in 2018, she moved to Switzerland. Between moving and trying to set up her business, she thought her leg pain was just because of the stress and changes, and she kept training as her priority.

It wasn’t until June 2019 that Leanne was diagnosed with a giant cell tumor in her femur, causing her active lifestyle and career to come to a dramatic halt. Giant cell tumors are aggressive and can destroy the surrounding bone. “I wish I could’ve known someone could walk normally and be active after this procedure at the time of my diagnosis. It was quite stressful to not know what the outcome would be.”

Three weeks after her diagnosis, she was undergoing surgery to remove the tumor. “All life stops, and you become a full-time patient.” In order to check the rest of her body for any other issues, she had to get a list of scans – MRIs, CTs, ultrasounds, X-rays, and everything in between. During her 4-hour surgery, done in Switzerland by Prof. Dr. Dr. med. Bruno Fuchs, 12 centimeters of her distal femur was scraped, replaced with cement, and a bone graft was placed at the head of her femur. For someone as active as Leanne, the adjustment after surgery proved to be difficult. She was “miserable and in pain and couldn’t stand for even a few seconds.” She recalls that it took two hours just to take a shower, and by the time that was done, she would get tired when she sat down to watch TV for just 45 minutes. “Your body goes into shock – it’s sore and painful.”

Leanne was in the hospital for a week after her surgery, and it took three months for the bone graft to set. However, even during this time, she didn’t stop being active. Within three weeks post-op, Leanne was walking up hills on her crutches, and she was back in the pool and gym almost immediately after her three-week check-up and clearance by her Professor. It took her a month to learn how to walk again once the bone graft had set, which she describes as “a bit like a duck to begin with.” Leanne continued to be active and progress throughout her recovery, keeping fitness a priority in her routine. By four months after her surgery, she was back to work as a personal trainer.

Leanne credits training and support from her friends and people going through similar journeys as keys to her progress. “Talk to people going through it. It’s okay not to be okay – look after your mental health. Always believe in yourself, and never give up on your dreams.”
__
Leanne is a personal trainer based in Switzerland, who works with clients with medical conditions and specializes in low back pain patients. She does online training and would be happy to meet for a free initial consultation to help others who are going through the same experience.
You can find more information about Leanne on her website: www.leannelevitt.com. Her Instagram handles are @leannelevittpt (fitness) and @levbiznet (consulting). Her twitter handle is @levittpt.
Leanne has also become the ambassador in Switzerland for Sarcoma Strong. Join us in the fight against sarcoma on August 14-16, 2020 at Sarcoma Strong’s Annual 5k.

Leanne completed her 5k run on 8.15.20. Her perseverance and positive energy are an inspiration and we are so proud of her accomplishments @sarcomastrong_ #sarcomastrong.