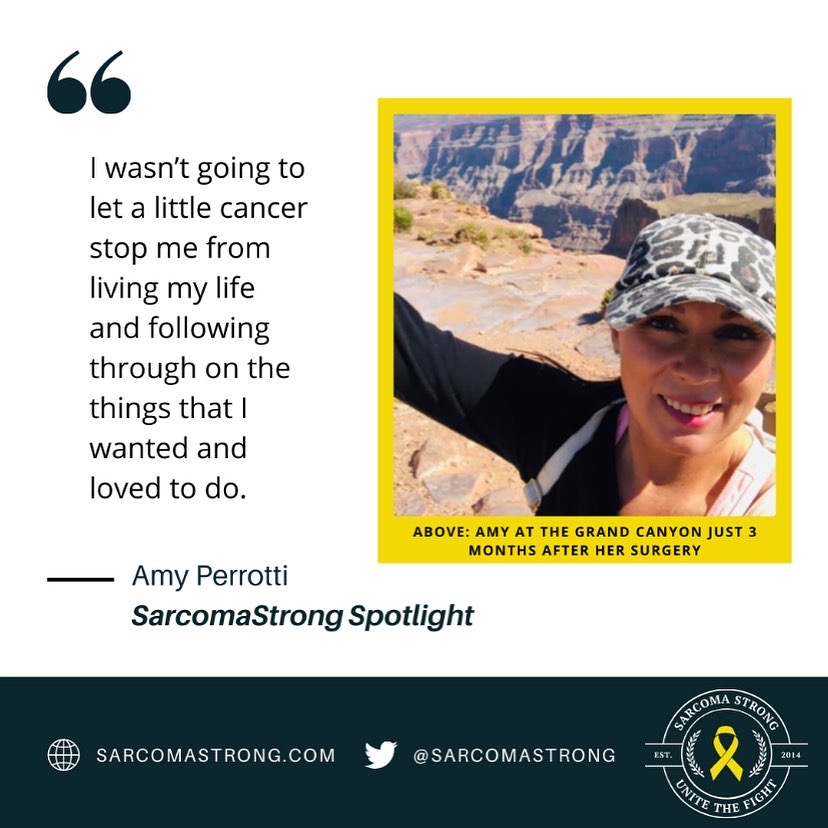 Amy Perrotti, a 46-year old single mom, loves to play sports, kayak, and travel. In 2019, Amy had developed back pain on her left side, along with a small bump that was tender to the touch. At the time, she thought the pain was related to the daily lifting of her then 16-year-old son Nick, who has cerebral palsy. After trying to take intermittent pauses from lifting him, the pain hadn’t subsided, so she sought the advice of her primary care physician (PCP).

An X-ray of Amy’s back did not reveal any abnormalities. Her follow-up visit with the PCP presented her blood pressure as being higher than normal, and she was still exhibiting back pain, despite the negative X-ray findings. Amy inquired about an MRI, but the PCP felt it wasn’t warranted at the time. Instead, Amy was prescribed a topical cream for the pain as she didn’t want to continuously take ibuprofen.

Because of the COVID-19 pandemic in 2020, Amy, unfortunately, lost her job, along with her health insurance which caused Amy to not seek additional care. However, she was convinced that her pain must have been from lifting her son.

Fast forward a year later, Amy was on a vacation in April of 2021 without her son. Despite not having to lift her son for over a week, the pain had greatly worsened. At this point, Amy knew something wasn’t right and went straight to the Bone & Joint Center when she returned home. Amy was immediately sent for a CT scan which revealed a left posterior lateral soft tissue mass and was directed to see Dr. DiCaprio in May, who recommended an MRI to further characterize the mass and its location. Even though the mass was small and indeterminate (unclear if benign or malignant), Amy decided that she wanted the soft tissue mass removed, because it was still causing her pain on a daily basis.

Amy had a chest wall mass resection done in June and after sending the soft tissue mass to pathology, it revealed a “Synovial Sarcoma” of the chest wall.  A second surgery soon after was warranted to remove everything within the region that the synovial sarcoma was touching, to obtain a “negative margin” or “tumor-free margin”

A 4-month scan was done in October, to see if the cancer had returned, and it appears that Dr. DiCaprio and his team had gotten all of it! Amy is currently in the surveillance mode of her care and is receiving scans every six months.

How did you feel after your October appointment?  “I was elated despite the pain of having two surgeries back to back and was looking forward to getting on with my life. Tomorrow is not guaranteed. I decided that I was going to travel the world and see as much as I can following my surgery.” Seeing the Grand Canyon was on Amy’s bucket list and she saw the Grand Canyon just three months after her surgery. “I wasn’t going to let a little cancer stop me from living my life and following through on the things that I wanted and loved to do.”

What were you feeling after your sarcoma diagnosis?

“I was so upset. I kept thinking how can this happen. My son needs me! Then I got angry and was determined I was going to fight like hell!”

How did you cope with your Sarcoma diagnosis and get through those months?

“I am beyond fortunate to have the best family and friends. They were my rocks. Constantly checking in on me, providing support, and remaining positive when I didn’t feel very.”

Is there anything else you would like to say or tell someone who is going through a sarcoma diagnosis ?

“I was fortunate to have the best doctor. He was confident, so that made me confident. Stay away from Google and ask your doctor your questions. Stay strong, even when you don’t feel like it, and never give up hope!”