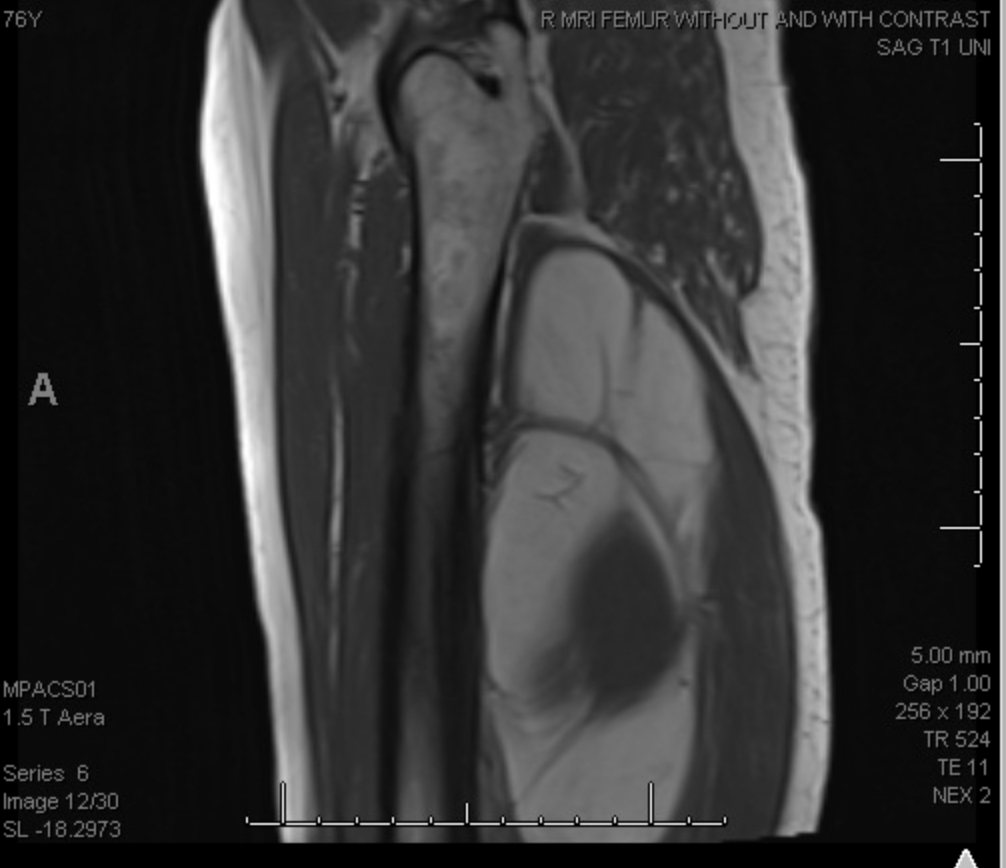 “I was terrified when I heard I had cancer.” Dianne shares her experience with sarcoma.

Dianne Hansen is a 76-year-old grandmother of 4 grandchildren who enjoys going to the gym, skiing, gardening, traveling, and volunteering at the New York State Museum. In December 2020, she noticed a small “lump” on the outside part of her right thigh just above the knee. The lump was soft, was mobile, and did not hurt. She thought it was related to her gym workouts and figured she would wait until her annual checkup two months later to notify her doctor. In February 2021 Dianne’s primary care doctor ordered an ultrasound and MRI to investigate.

MRI images demonstrating the mass in her thigh:

Multiple needle biopsies were subsequently taken, and Dianne was diagnosed with liposarcoma of her thigh.

“I was terrified when I heard I had cancer,” Dianne explained.

“My mother died of pancreatic cancer and her progression was quick and terrifying. Those were my only memories about cancer. I cried every day the first month following my diagnosis because I was so overwhelmed and afraid.”

Dianne started to see a psychologist to deal with the flood of emotions. Over the next few months, she learned to channel her angst of sarcoma into a positive attitude, taking whatever steps she possibly could to improve physically and mentally.

Following her diagnosis, Dianne received radiation therapy for 5 weeks. Since radiation commonly causes skin thinning and fibrosis, she had to wait an additional 5 weeks for surgical resection of her liposarcoma.

“During those 5 weeks I was very anxious and purposely did not read too much about sarcoma because I was so scared of what I might find. I didn’t want to know all the possible things that could happen.”

Finally, in June 2021, Dianne underwent surgical resection of her thigh liposarcoma. Her sciatic nerve, which controls most of the lower leg muscles, was closely adhered to the liposarcoma and needed to be separated along with resection of the mass itself.

Dianne was eager to return to her active lifestyle following the surgery and began focusing on regaining use of her leg in physical therapy. Six months after her surgery, she is frustrated that her progress has been so slow. Currently Dianne has regained enough function to tie her shoes and go on walks but still has significantly decreased range of motion in her right leg. She also still experiences post-surgical nerve pain, cannot sit in a chair without a pillow to cushion her leg, and cannot lift her right knee to her chest. Although she still is unable to garden, ski, or volunteer, Dianne is happy she can still enjoy spending time with her grandkids and family and traveling with her husband.

“I have no idea how long it is going to take to get back to ‘normal’. I’m ok with not reaching 100% normal but I try to keep a positive attitude and do anything in my power to improve.”

Lastly, Dianne is extremely thankful for her supportive husband and children and the rest of her large family. After she was diagnosed, her entire family sent hand-written notes and regularly called her. “I feel extremely lucky to have them and know I am not alone in my fight against sarcoma.”

PrevPreviousDr. Santiago Lozano-Calderon, 2019 recipient of SarcomaStrong research grant, and his team at Massachusetts General Hospital shed light on the genetics of extraskeletal osteosarcoma.
NextEwing’s sarcoma warrior, Nick, shares his story and his plans to collaborate with SarcomaStrongNext